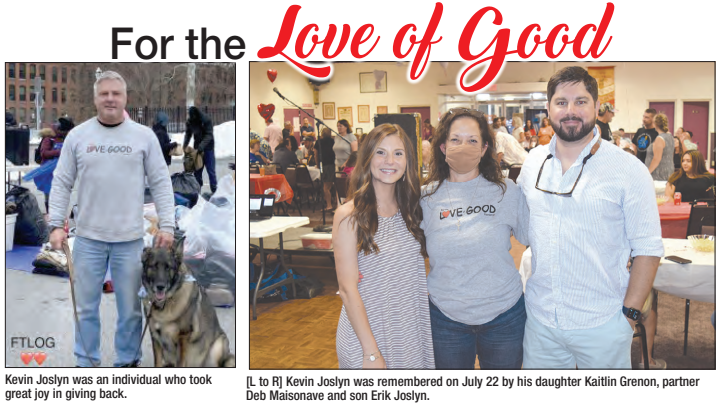 CHICOPEE – City resident Kevin Joslyn passed away on Feb. 28, but his legacy of giving will inspire others in and around the city for years to come.

Joslyn, a 62-year-old U.S. Air Force veteran and retired Hampden County Sheriff’s Department Corporal, launched the “For the Love of Good Foundation” in 2018, a nonprofit designed to help neighbors in need.

Five months after his death, the foundation continues to make a difference in Chicopee and Holyoke. Deb Maisonave, Joslyn’s partner and co-administrator of the foundation, recalled his strong sense of purpose.

Joslyn’s generosity revealed itself in many forms, but he was perhaps most passionate about helping others pay for life-sustaining bills.

On July 22, dozens of people attended a comedy show at the Chicopee Moose Lodge 1849/Chapter 1489 on Fuller Road to support the foundation’s efforts to aid the homeless in Chicopee Center and parts of Holyoke.

Most importantly, they arrived to celebrate the life of Joslyn.

“He was always very altruistic; always giving of himself. He had real zeal. I feel his spirit every day so I try to live the way he lived every day in my life,” Joseph Violette, a longtime friend of Joslyn’s, said

As the room filled up last Friday, Joslyn’s close friends and family were moved by the show of love and support.

Kaitlin Grenon, Joslyn’s daughter, said her father’s mission was to grow and expand the foundation to help as many people as possible. She said his humble roots helped shape the person he became.

“My dad grew up poor so he always had a bleeding heart for others who couldn’t make ends meet, the way his life was when he was younger,” Grenon said. “What he did have, he would give to anyone who needed it. More, so he always dreamed of helping others in a big way. (The foundation) was his way and his vision of being able to help people who cannot make ends meet, the poorest of the poor, the needy and also the homeless in our area who have nothing.”

Currently, the foundation is growing as it follows the direction set by Joslyn. Beyond western Massachusetts, the foundation delivers food and money to two community partners in Haiti.

Locally, a recent outreach event drew 45 volunteers. Maisonave is confident that the foundation has potential to further expand its impact.

“People call us that have emergencies where they need financial support immediately. We don’t have any red tape,” Maisonave said. “By serving others and getting out of your own self, everything that you were going through can change. It just got better. By (Joslyn) serving others, he brought positive energy and got positive energy back.”

When asked what her father would have made of last Friday’s fundraiser, Grenon expressed her belief that he was present in spirit.

“He’s with us always, and he makes it very known. I know that he’s smiling so big right now seeing how things are coming to fruition even though he’s left the world,” Grenon said.

Changing the world with kindness, one person at a time, and let it begin with me!